K-water is concentrating its efforts on sustainable clean energy development for local communities in development projects led by public interests.
The Hapcheon Dam Floating Photovoltaic Power Generation project is expected to serve as a major catalyst for the revitalization of the local economy by allowing the residents to join the SPC invested by K-water as debt investors and earn stable profits. Also, the Yongdam Dam Floating Photovoltaic Power Generation project is a development project customized to the local area where the residents share the revenues from power generation with K-water by jointly investing in the project through their cooperative association.
In this way, K-water is enhancing the public values of public corporations with a new business model that seeks coexistence with local communities, expanding sustainable eco-friendly energy businesses.

K-water began testing the possibility of floating photovoltaic power generation development by installing a 2.4-kW pilot model in 2009 on the surface of Juam Dam reservoir. Following the installation of a 100-kW demonstration model in 2011, K-water constructed a 500-kW facility at the dam in 2012, which enabled the world's first commercial floating photovoltaic power generation using the surface of a dam reservoir. Since then, K-water has been laying the foundation for the widespread use of the power generating method by promoting it thorough environmental verification and the reduction of equipment production costs. In 2016, K-water constructed a 2-MW power generation facility at Boryeong Dam in 2016, followed by a 3-MW facility at Chungju Dam in 2017, for commercial power generation. Especially, through environmental monitoring which has been carried out since the completion of the floating photovoltaic facility at the Hapcheon Dam in 2013, K-water has continuously tracked its impact on water quality and ecology. In addition, K-water has taken the lead in disseminating and expanding clean energy projects that are harmless to the natural environment by using eco-friendly equipment compliant with the Korean tap water hygiene and safety standard (KC).

What is floating photovoltaic power generation?

It is an eco-friendly method for generating electric power that combines marine technology (shipbuilding + mooring) and renewable energy technology. It uses a fusion solar photovoltaic facility composed of solar modules installed on the surfaces of dam and reservoir water. 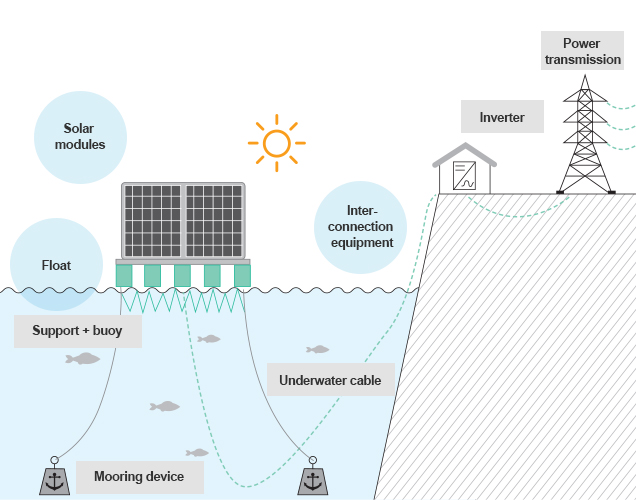 K-water endeavors to create new industries that utilize the added value of water leading a shift in thinking about energy. As a pilot project based on the properties of water (4℃), it has introduced a cooling and heating system that uses hydrothermal energy to the Lotte World 2, which led to the reduction of annual energy costs by 28% and 348 tons of carbon emissions. Furthermore, K-water is focused on the development and dissemination of a standard model for urban distributed hydrothermal energy projects and the improvement of relevant systems by promoting legislative work to include hydrothermal energy in new and renewable energy sources.