Overview and current status of the Smart Water City projects

SWC (Smart Water City) is a city where a healthy water supply system is implemented, with ICT technologies applied to the entire water supply process from water sources to faucets, the scientific management of the quantity and quality of water, and the provision of tap water information to citizens so that they can trust its quality and drink without worries. It utilizes excellent technologies for water safety services, such as residual chlorine equalization, automatic drainage, real-time water quality measurement and quality information provision, pipeline cleaning, advanced pipeline inspection requiring no water supply discontinuation, smart metering, and a remote water leak monitoring system.

The Smart Water City pilot project, which was first carried out in some areas of Paju in 2014, gradually expanded to the entire city in 2016 as it drew increasingly positive reactions from citizens. This project greatly improved the local tap water quality and the city's direct tap water drinking rate also increased from 1% to 36.3%. The citizens' satisfaction with tap water also increased from 80.7% to 93.8%. Overall, the project has been evaluated as successful and these achievements have laid the foundation for the expansion of the Smart Water City projects to the entire country. Songsan Green City and Busan Eco-Delta City, which are currently under construction, were designed as Smart Water Cities from the beginning, and in 2017, the first national Smart Water City project was launched in Sejong. K-water has also been given approval to introduce the system in Dongducheon City, Yangju City, Jeongeup City, Goryeong County and Naju City in 2017. Thus, it plans to gradually expand smart water management to 21 local governments that have already entrusted water management to K-water by 2021. 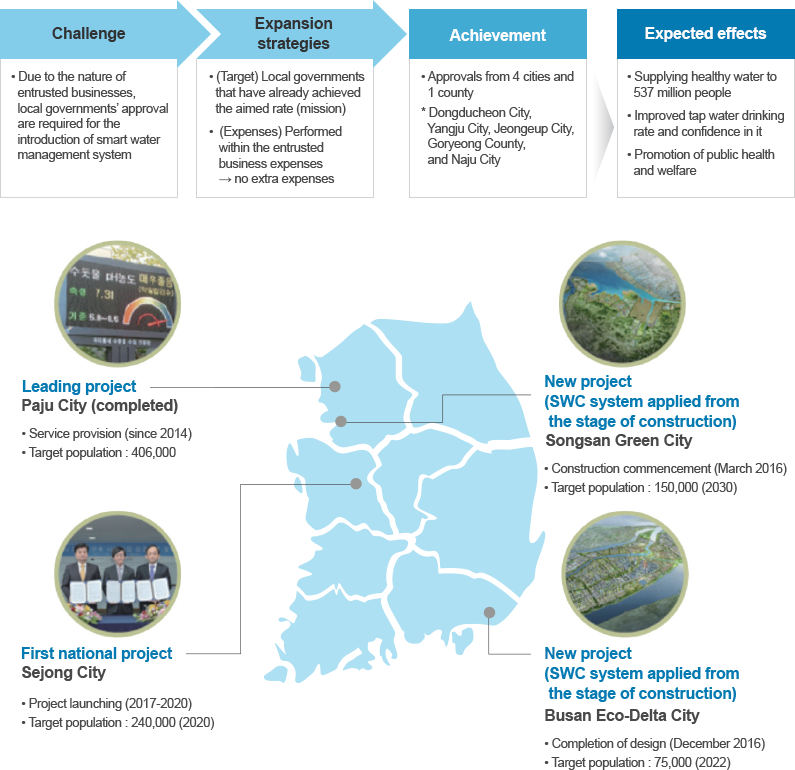