Searching for solutions for nationwide drought 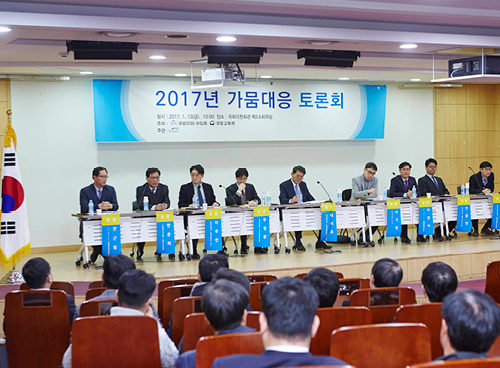 On January 13th, K-water led the ‘2017 Drought Response Debate’ that was co-hosted by the Ministry of Land, Infrastructure and Transport and the office of lawmaker Seong Il-jong. Parts of Chungcheongnam-do Province received little rainfall last year after summer and the areas in western Chungcheongnam-do Province and southwestern Jeollanam-do Province is expected to suffer severe drought this spring. A preemptive preparation and solution through the cooperation of the National Assembly, the government and related organizations for this natural disaster is needed as drought damage is expected to happen more frequently in the future. The debate was attended by professionals from numerous fields, including academic, government, local government and media, to discuss diverse solutions to ease droughts.